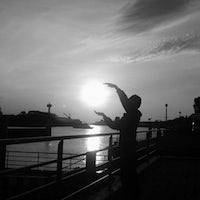 Instead of an architecture, we are choosing to have a network. More precisely, what we are building is a blockchain network which does not look one or even claim to be one.

Since we are standing on the shoulder of giants, we are using Hyperledger Fabric with its membership services and peers for committing, endorsing, leading and anchoring.

The ledger and the hypergraph are in essence the same thing from an observer or sensation and perception perspective. The only way these are distinctly separable is when their logical structure is made clear via a visualization or a topologically isomorphic model re-creation.

Apart from Fabric of our space time, we also have Indy and Composer working together with Cov-Hub and other dashboards on the UI side.

All data, components and modules of the system that we control on our own follow git versioning and semantics. However apart from just the usual 'everything is a file' Unix philosophy, we extend this metaphor of 'everything' to also include files, tables, schedules and queues.

Couch-Potato project adds an abstraction layer and a middleware for all of the core backends and core backend plugins across all backends. The Dashboard project group and Special Interest Groups (SIGs) are responsible for deciding global changes to our UI/X. These are backends are served by federated servers that mimic that provincial and municipal divisions of Nepal. We intend to preserve this federated structure in every nation where it is applicable.